Nicholas Radina is a freelance audio engineer, problem solver and musician, based in Cincinnati, OH. Currently touring as the monitor engineer with the band O.A.R., turning knobs for all types of events and smacking cowbells with Salsa bands.

Hi friends! I was born and raised just outside of Cincinnati in Milford, OH. I started playing music at age eight, studying the Suzuki method for Piano and and soon after the guitar at 10.
I started performing professionally at age 13 playing guitar and singing in local blues clubs with my first professional group, Out Of the Blue.

In 1994, I was awarded a scholarship to the Berklee College of Music in Boston. After a short stint in a summer program, I turned down the scholarship and decided to come back home and continue paying dues in the local Cincinnati and regional club circuit.

At age 19, I began my infatuation with Latin music co-founding the Cincinnati Afro-Caribbean group, Bailando Desnudo, playing guitar, cuatro, percussion and singing.  Bailando Desnudo performed it’s brand of Salsa, Reggae, Soca and other Caribbean music to Cincinnati and beyond by playing over 250 shows a year.

This is the time I learned to play the 10-String Puerto Rican Cuatro. The instrument I play now was built for me by a gifted luthier, Roberto Rivera. The Cuatro, Puerto Rico’s folk instrument, has 10 strings — 2 choruses and 3 doubles tuned B-E-A-D-G. If you look close, my grandfathers signature is inlaid in the fretboard — the first musician of the family.

In 2005, I performed with the legendary cuatristra (cuatro player), Yomo Toro and pianist Larry Harlow at the CincyLatino Festival — a very special moment for me and such an honor to meet and perform with Yomo.

I continued to study Latin music by learning Latin percussion, specifically the Timbal. I joined the groups Tropicoso, Salsa Caliente and several others, smacking cowbells and having a wonderful time.

For several years, I had the honor to work with the incredible husband and wife songwriting and performing duo, Over the Rhine. Tour managing, sound engineering and ultimately performing as a member of the band playing guitar, Cuatro, percussion and singing.

I’ve been very fortunate to have my music featured on television commercials, radio, theater, podcasts in addition to appearing on many recordings.

For over ten years, I was the house sound engineer at the historic 20th Century Theater in Cincinnati. This experience led me to create the column, “Flying Solo” for the magazine Live Sound International and companion website, ProSoundWeb — a column focused on helping fellow sound engineers by offering live sound techniques, fundamentals and tips.

In 2008 I began my work with the nationally recognized Cincinnati Parks — restructuring and managing the audio department. This position I proudly serve today gives me the opportunity to help produce hundreds of outdoor events in several beautiful parks.

Salsa on the Square My long standing relationship with Cincinnati’s Latin music scene led me to co-create Cincinnati’s annual incredibly popular, free, outdoor summer music series, Salsa on the Square. I’m incredibly proud of the series success — now in its 8th year, the series continues to feature wonderful live Latin bands and huge dance classes. In addition to the event, I’ve produced six compilation recordings featuring original music from the musicians in the series. These recordings were included on an annual CD which was given away free to the fans every season. 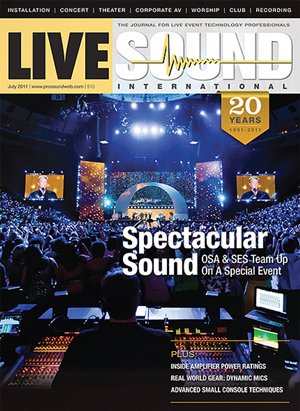